North Somerset Coaches was founded in 1969 with one coach operating a school contract at Backwell School. The company expanded during the 1970’s and was well-known locally for an unusual fleet of coaches, including two purchased brand new (HYC521N Ford / Duple Dominant in 1975 and B97WHT Bova Calypso in 1984). Fleet livery was initially white and black, changing to a then-fashionable cream with orange and brown stripes in the mid-1970’s. This gave way to more plain schemes in the 1980’s, and overall white or red in the 90’s

The founder decided to take early retirement in 2007 and the company changed hands; the new owner taking on the challenge of bringing the company into the 21st century. 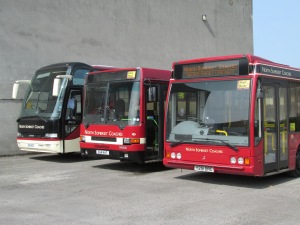 The daily operations of the company were sold in 2013 to Carmel Coaches, allowing us to concentrate on our growing classic bus and coach collection. Although the trading name “North Somerset Coaches” and PSV Operators’ Licence remains, we now focus on restoring, preserving and exhibiting our heritage and vintage vehicles.
We hope you enjoy finding out more about us and look forward to hearing from you if you’d like to hire one of our buses or coaches, or if you’d like us to participate in a local event, festival, rally or fair.